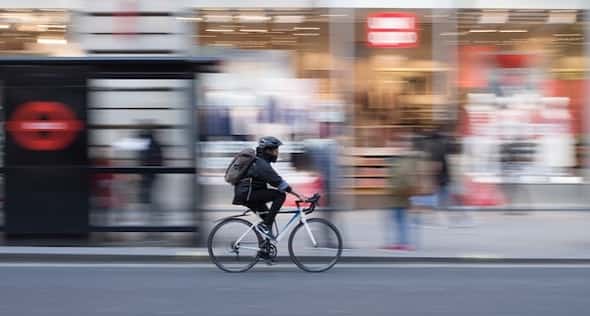 How Is Inertia Used When Riding A Bicycle?

The law of inertia is a physics term that is also referred to as Newton’s first law or Newton’s law of inertia. It states that an object continues in its existing state of rest or motion in a straight line unless that state is changed by an external force such as braking.

In this post, we will go through how is inertia used when riding a bicycle. Let’s get started!

What Is Inertia In Cycling?

The law of inertia is simply Newton’s law of inertia states that an object in motion or is resting tends to stay at rest or move at a constant motion unless a force enacts upon it.

The law of inertia relates to bicycling greatly. This is due to the fact that the cyclist is in a constant state of motion when on a bicycle. The motion of the bike is dependent upon the cyclist pressing down on the bicycle pedals and moving them, thus, helping the rider move the bike forwards.

And the cyclist can keep moving unless a force enacts upon the cyclist or bike. This force can be anything, like friction, which will cause the bike tires to completely stop.

The Law of Inertia is also on full display when the rider moves on the bicycle when the cycle is stopped. How this relates to the concept of inertia is because the cyclist is using a force that is unbalanced and applying it when the bicycle isn’t moving. Therefore, according to the law of inertia, the bicycle should begin to move and accelerate.

This concept is very much important and is the most common way of explaining the law inertia when someone might not understand it well enough. This goes on to explain how it can be used in cycling.

How Is Inertia Used When Riding A Bicycle?

The concept of inertia is an interesting one, especially when riding a bicycle. Because unless the person stops pedaling the bike. The bike won’t slow down and stop.

When going to a stop, the cyclist won’t just stop because that is how the law of inertia works. Friction is an unbalanced force that will stop the bike slowly and then slow it down enough so the cyclist can come to a stop if they need be. This is a basic explanation of how it works, but here is another example.

When the cyclist is pedaling the bike, the bike will start to move and accelerate forwards in the direction it is facing. This is until, of course, the cyclist slows down with pedaling or stops pedaling completely, allowing for friction to take over and slow it down.

This is also why you shouldn’t go extremely fast on bikes when pedaling, going a slow to medium pace is enough for it to move. You don’t want to be able to come to a complete stop when you stop pedaling, so going too fast can lead to accidents if you don’t see something that can cause you to crash.

Friction won’t stop it completely all at once, just enough to slow it down enough to eventually make it come to a complete stop, but again, not all at once.

What Kind Of Force Is Used When Riding A Bike?

If you have ever biked on a flat, open road, you can see the effects of push and pull forces. The forward force comes from pushing and pulling on the pedals to make the tires go back against the road.

When the forward push and pull is much more than the forces trying to stop you, then you accelerate or move forwards on the bike and road. If you keep going faster, the air resistance force will push back on you.

When you do ride a bike, you are pushing on the pedals, which, therefore causes the force for the bike to move if it is more force than the air resistance. Bikes cannot move on their own because of this, they need a force to be enacted upon them.

Also, the law of inertia is not a force but is an explanation for how things move when they are pushed or pulled. Inertia is just a set of forces explaining how things move, like a bicycle, which is the best example.

Finally, the law of inertia is a physics term that is also referred to as Newton’s first law or Newton’s law of inertia. It states that an object continues in its existing state of rest or motion in a straight line unless that state is changed by an external force such as braking.

And that’s it for now! I’d love it if this post on how is inertia used when riding a bicycle was helpful to you. Let me know if you have any questions and let me know if there is more to add.