How To Carry A Passenger On A Bicycle?

Typically, there are a couple of options to carry a passenger on a bike. The main one is to carry someone on the crossbar or on the back of the bike. Some countries and states have laws that do not allow cyclists to carry passengers unless the bike is adapted. This is for safety as it can be hard to control the bike if the rider has to make sudden movements.

In this post, we will go through how to carry a passenger on a bicycle. Let’s get started!

Can You Take A Passenger On A Bicycle?

It is possible but in a lot of countries and states it is illegal unless the bike is adapted to carry passengers. The reason is basic health and safety as carrying someone on the crossbar or on the back of the bike can make it hard to balance the bike if there are any sudden movements.

How To Carry A Passenger On A Bicycle?

There are two ways to carry a person on a bike. I am excluding riding on the handlebars as this is just ridiculous. These are as follows.

Sitting On The Crossbar

Not all bicycles have crossbars or the crossbar may not be strong enough to carry a passenger. Using the crossbars is not comfortable and may need some adjustments to make it more comfortable. Although riding a bike is relatively straightforward, it does require skill to maintain the balance of the bicycle and the additional weight of the passenger.

Passengers searching for additional peace of mind can ask the rider to wear a backpack or something similar for them to hold on to.

The passenger also needs to watch their feet as dangling legs could get caught in something. And cause an accident.

To set off in this position, the rider should stand up when pedaling. This ensures more momentum is gained to contend with the additional weight. Once the rider has built up speed, pedaling should become more manageable.

If you are trying out sitting on the crossbar for the first time, it can be helpful to get some practice in an uncrowded area until you get used to it.

On The Back Of A Bike

One of the most common forms of traveling on the back of a bicycle is via the use of pegs. Although synonymous with BMX bikes, the pegs can be used for many different models. 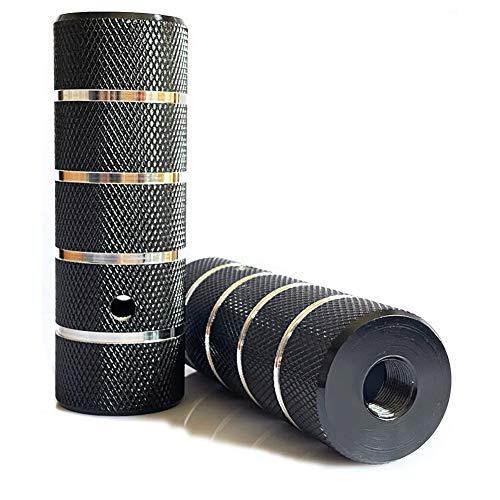 The original design of bike pegs was to allow riders to carry out stunts on a stable platform. However, it wasn’t long before children used their imagination and found them perfect for friends riding on the back of their bicycles.

To ride on the back of a bicycle via bike pegs, also referred to as stunt pegs, the rider should first mount the bike to balance. Once the bike has been secured, the passenger should step on one peg at a time while holding onto the rider’s shoulders.

If there are no bike pegs, it may be possible to use the wheel fastenings, but this will depend on their diameter. It is advisable to ensure the passenger won’t slip while the bike is in motion when using this approach.

Some bicycles may have a rack on the rear that can transport others. The height of the rack can vary, as can the weight it can hold. It is vital to check that the rack won’t buckle and offers plenty of legroom. This ensures there is no risk of the spoke becoming damaged and ensures the passenger’s feet don’t intersect with the heels of the rider

The back of the bike can also be used in conjunction with a two cart, although this approach is only taken by those transporting small children using their bicycle.

Finally, there are a couple of options to carry a passenger on a bike. The main one is to carry someone on the crossbar or on the back of the bike. Some countries and states have laws that do not allow cyclists to carry passengers. This is for safety as it can be hard to control the bike if the rider has to make sudden movements.

And that’s it for now! I’d love it if this post on how to carry a passenger on a bicycle was helpful to you. Let me know if you have any questions and let me know if there is more to add.